Tracing the history of cannabis across continents is interesting, but tracing the bongs and pipes through the ages is also interesting because it gives us a window into the different cultures and times.

Cannabis has been around since the BC era, and there is enough evidence by now to show us that it was used throughout ancient history.  Many of us forget that this would imply that some sort of smoking apparatus must have been used to smoke it properly.  Many may be surprised to discover just how long-ago pipes were first put into use, specifically for the purpose of smoking cannabis.

The pipes and bongs that many of use today are, in fact, remarkably similar to the models that were popular thousands of years ago.  As archaeologists uncover more and more pipes from years and years ago, it is becoming clearer that not all that much has changed after all.

Now, let’s get to exploring the history of pipes and bongs since the first records of their use, to show you just how fascinating their history is. 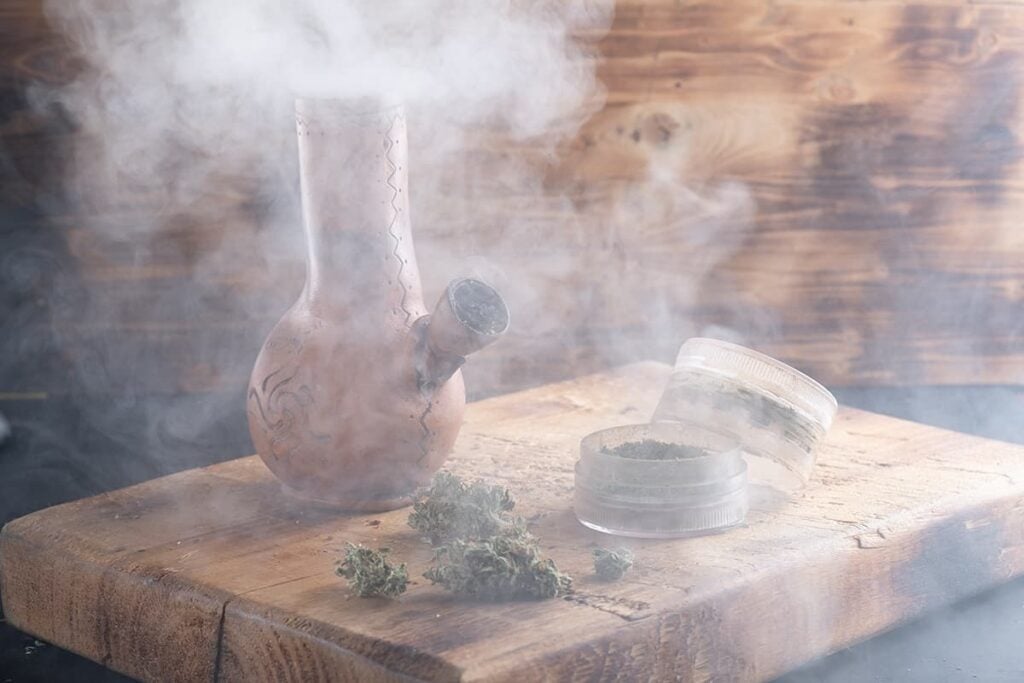 Bongs and Pipes through the Ages

Clay Chillums: Were They the First Smoking Devices?

It is quite possible that the earliest smoking devices were small chillums made from clay.  We know that the earliest records of cannabis use come from central Asia, where the cannabis plant grows natively.  This would imply that those from this region would have been the first to smoke marijuana, and to do that, they needed to create a device.  We have actually uncovered chillums from this region that date back to hundreds of years BC.  Glass-blowing was not invented until about 30 BC, and so clay had to do for the time-being.

These chillums do not look all that different from today’s, as they are straightforward devices that don’t require much evolution over the years.  The clay was made from the resources in the Earth, as clay was used for all kinds of things, including pottery and even weapons.

Stone, Wood and Other Materials

Eventually, other materials began to be utilized in order to make pipes.  Chillums did not fall out of fashion, but pipes did become the go-to, taking on larger sizes and becoming ornamental, depending on who the pipe was for.  Wood was a commonly used material, and is still used today for tobacco smoking, and stone, while requiring more effort to carve, was, naturally, widely available.  We do have access to pipes that date back thousands of years which have traces of hashish in them, which come from the Middle East, where hashish was the cannabis product of choice.

Some Asian regions even used coconuts to make pipes, which instantly brings to mind our modern-day use of apples as smoking devices.  Coconut is durable and worked fine for this purpose.

Glass dates back to 3000 BC at least, where it was discovered in Mesopotamia.  But, glass-blowing was not common practice until 30 BC, as up until then, it was largely used for pottery and jewelry.  Glass-blowing first became trendy in Rome, and the techniques used back then are still used to produce pipes today.

While glass-blowing became a popular means for making pipes, it was expensive, and required a lot of skill.  Therefore, clay and wooden pipes continued to be used for centuries.  In the 15th and 16th centuries, smoking tobacco out of a pipe became extremely popular, and so the pipe industry became enormously successful.

Meanwhile, in some regions of the world, glass-blowing became a more widespread form of craftsmanship, and so glass pipes specifically made for cannabis use were catching on.

In the 1920s, archaeologists exploring Africa discovered what may have been the first water pipes, known as Earth pipes, used to smoke cannabis.  They acted similarly to modern water pipes, made from various natural materials, and allowing the user to inhale the smoke while taking water into their mouths at the same time to cool it down.

In the 16th century, water pipes were believed to first become popular in Asia.  First, they were likely made from bamboo, although glass ones were slowly becoming en vogue.  In Russia, a bong made of gold was discovered that dates back hundreds of years.

Bongs quickly became associated with status in China during this time, as they became very ornate and decorative, and were collected by the elite of society.  They were originally used mainly for tobacco use, but there’s enough evidence to show that they were also used to smoke marijuana.

Glass-blowing fell out of fashion for a while, to find a resurgence in the 19th century thanks to Louis Comfort Tiffany, who made decorative glass fashionable again with his company, Tiffany Co.

In the 1940s, glass water pipes became popular among those who smoked cannabis, and the United States developed its first industry of glass-blowing for this purpose.  The word bong entered the dictionary during this time.

Meanwhile, ornamental glass-blown pipes became standard for those who smoked, being available in various sizes, shapes and colors.  In the 1960s, during the hippie movement, marijuana entered the mainstream for the first time in decades, which resulted in a huge demand for glass pieces like pipes, water pipes and larger bongs.  Around this time, San Francisco opened up several head shops that sold these devices to the weed-loving residents of the city.  Celebrated glass-blowers began to craft exquisite pipes that set the trends we still follow today.

Today, glass pipes and bongs are just as popular than ever, and as marijuana becomes legalized in various regions across the country, they are more out in the open than before.  Further, there are now technologically advanced devices that vaporize cannabis rather than rely on combustion, which our ancient ancestors could only dream of.

A newer trend in the world of pipes is the use of silicone, which is more durable than glass, and more lightweight as well.  However, we doubt that glass pipes will ever fall out of fashion, as they are synonymous with cannabis, and offer visual interest to generations upon generations of smokers.

From the clay chillum of the ancient days to today’s advanced vaping hardware, smoking devices intended for cannabis use have evolved over thousands of years.  But what is more striking is how today’s pipes are quite similar to the ones used by our ancestors centuries ago.  At the end of the day, marijuana works just as well whether you are using a primitive device made from a coconut shell, or an elaborate bong that is several feet tall.