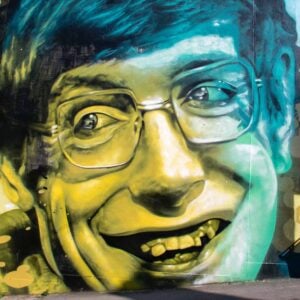 Stephen Hawking in case you don’t know was an English theoretical physicist whose theories about exploding black holes and quantum physics made him the Einstein of his generation. Amazingly enough he achieved this even though he acquired ALS (amyotrophic lateral sclerosis) – an incurable and progressive neuromuscular disease. He died in 2018.

Overall the Stephen Hawking Kush Cannabis Strain allows you to focus more by reducing stress, tension, pain, which often inhibit reactions and outlooks. With a low THC it’s not a high-inducing strain at regular doses and allows you to be generally more focused and mindful in the moment. This makes it a great product to use to increase those activities that engage both the mind and the body, all the while reducing pain and tension. It enhances the effect of being Mindful and deliberate, and has both Recreational and medicinal uses.

Like its namesake, the Stephen Hawing Kush strain in an innovative genius for relieving pain and tension allowing those using it to focus and increase their motivation and attention, to get stuff done! This strain is one in a series of strains called the “Great Minds” strains, which focus on higher CBD levels, which helps you be more mindful and deliberate in your focus and thinking. It’s a cross between the Harle-Tsu strain and the Sin City Kush strain.

An overriding hallmark of the Stephen Hawking Kush cannabis strain is it’s ability to engage the mind and body. It does this for itself, too, with the engaging aroma and look.

Sounds good, but what does is smell/taste like? Well, one of the unique things about the “Great Minds” strains is their look and aroma, both of which are robust. The Stephen Hawking Kush Strain offer a bright, fruity flavor with some bitterness, making for a strong tang. There are fruity flavors including berries and grape, but there’s also the distinct root scent that you get from the Harle Tsu strain that is a bit musky, earthy. The fruit flavors counter it to make it more of a sweet taste.

The first thing you may notice about the SHK flower is it’s purple coloring. It’s a normal medium size that’s pretty well round and has the look of a ragged sativa bug. The leaves are olive colored with orange and pink pistils. But the leaves have more color, with brighter blue and purple colors, which typically appear due to color growing temperatures. The leaves also have the crystal-like white coloring of the trichomes which makes that even prettier, but also sticky.

This strain is a high CBD concentrated strain with low THC and is therefore a good choice as a medical marijuana option for those seeking options for:

This strain is known to be fast-acting, with users noting how they can feel the waves of relaxation starting at the neck and then flowing down through the body to the core, then out to the limbs. This progression increases a sense of calm and peace, similar to the direction of mindfulness and meditation guides who encourage the progressive body area relaxation focus. When using this strain you can actually follow the process rather than directing it, leading you to the end goal which is relaxation to enable more thoughtful, deliberate, mindful approaches to your work or goals.

If you’ve tried meditation you also know the risks of your mind wandering. The Stephen Hawking Kush strain offers a similar outcome, which while it won’t increase your brain power, it definitely opens you up to the conditions for mind wandering and free-association thinking. This can be helpful in some instances, but probably not the best time to focus on the more analytical or detail-oriented work.

It’s low THC levels aren’t likely going to give you the “couch look” high, but it’s enough to have an effect, to basically “take the edge off”.

Possible Side Effects of the Stephen Hawking Kush Cannabis Strain

The high CBD and low THC typically means few side effects, with isolated reports of paranoia or edginess of the mind racing. The higher CBD level typically counters and alleviates those tendencies in this strain. You’ll likely get the cotton mouth effect (dry mouth) and eyes, which leads to the redness, but these are mild. Stay hydrated.

While low, there is THC in this strain, so taking it at higher that average doses can increase side effects, and add to them such as dizziness and being “zoned out”, so be aware to the effects it has on you and how much you’re taking.

This is a fairly easy strain to grow, which is good news for the beginning grower. There are several phenotypes for this strain, each with distinct traits. Some are tall and spindly, others squatter and fuller. They can be grown indoors or out, but as with most, the control of humidity it grows in is key to its development and yield.

Whether you’re looking for a quick relaxation, relief from pain or stress, or even enhanced experience for those activities that engage activity and brain power, this is a great choice take the edge off and get a boost in awareness and creative thinking. With a lower THC level you won’t get the “high” from normal dosing, and you still get to enjoy the sense of euphoria.