You’ve just started getting used to the concept of CBD, now you’re becoming aware of CBG? What on the earth is the difference?

Products consisting of cannabidiol (CBD) have recently taken off in public interest, as the cannabinoid’s reputed anti-inflammatory and anti-oxidant impacts have made it into a trendy active ingredient for skincare brands and “wellness” products.

However recently another non-intoxicating cannabinoid has been making news as a prospective therapeutic. Cannabigerol (CBG) is a less plentiful cannabinoid, however it has been undergoing studies based on claims that it helps to decrease inflammation, combat pain, and even slow the expansion of some cancer cells.

CBG might sound comparable to CBD on the surface but there are crucial distinctions between the two.

As CBD continues to gain popularity, brand names are starting to catch catch on. Ingenious companies are already starting to offer products that revolve around one of the other 100 cannabinoids discovered in the plant.

One of these cannabinoids is cannabigerol, or CBG. Discovered by researchers in the 1960s, CBG is the basis from which all other cannabinoids are made, which is why it is often called the “stem cell” of cannabinoids. This unique foundation gives CBG an enormous promise and makes it particularly interesting to both consumers and to scientists.

“It’s definitely gaining momentum,” says James Rowland, CEO of Steve’s Goods, a Colorado-based manufacturer of CBG goods. “We have personally administered CBG to thousands of people at over 50 events. It’s the most requested product on our website and we provide education to thousands of receptive people both in person and online every month.”

The US government is also interested in further studies of CBG. In 2018 The National Center for Complementary and Integrative Health (NCCIH) announced their program and intent to research minor cannabinoids including CBG that could help manage pain.

There are over 120 cannadinoid compounds in the cannabis plant. Cannabigerol (CBG) is one of them, but is also the non-acidic form of cannabigerolic acid, the parent molecule that is the source for all the other cannabinoids are derived. 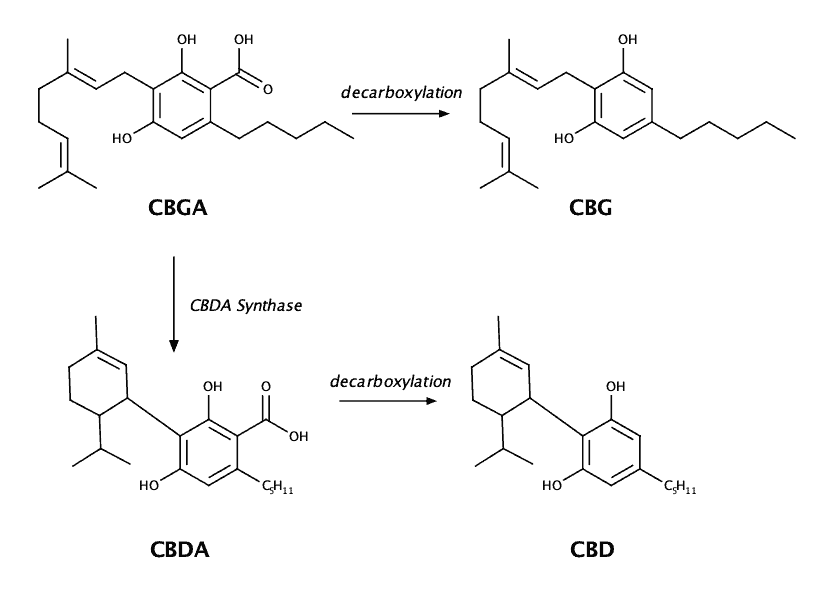 As the marijuana plant develops, CBGA, the acidic type of CBG, is transformed by plant enzymes into a certain ratio of the three main cannabinoid precursors: tetrahydrocannabinolic acid THCA, cannabidiolic acid CBDA and cannabichromic acid CBCA.

From the amounts of CBGA that are not converted into these precursors or any of the other smaller cannabinoids, CBG is formed by decarbonization.

As a result of this process, cannabis strains typically contain very little CBG, often below 1 percent by weight by weight. To achieve greater yields of CBG within marijuana, professional plant breeders have actually begun to investigate genetic control and hybridization. Leafly report that researchers have also effectively determined the optimal extraction window for cannabis to maintain the largest amounts of CBG, and recommend that the extraction be done about six weeks into an eight-week flowering cycle.

It appears that CBG serves to limit or block the effects of THC, which not only blocks the “high” associated with cannabis and THC, but also blocks the sense of paranoia that is sometimes reported when consuming high doses.

What Conditions does CBG Help Treat?

As with medical marijuana and CBD, there is limited research and scientific evidence in the efficacy of CBG, of which there is even less of. Because CBG has been found to be effective in very specific physiological systems and problems, scientists and researchers are focusing their studies.

While these studies are in early stages, scientists are hopeful and excited about the initial results, which enable them to continue their researcher further, with the hope that one day many of these conditions can be tested and approved as therapeutics, individually or in combination with other products or cannabinoids.

The non-psychotropic factor and the limited side effects additionally make this a promising base product for potential therapeutics for humans.

Why is CBG So Expensive?

The biggest stumbling block to CBG as a typical treatment is the cost to manufacture. CBG is considered one of the most expensive cannabinoids to manufacture, so much so that it has even been dubbed the “Rolls-Royce of cannabinoids.”

“That’s because most hemp only contains minute percentages of CBG, whereas there are now hemp strains that contain 20 percent CBD in the crop. If the CBG content of the same crop is only 1 percent, that means you need to extract 20 times the amount of biomass to get the same amount of CBG out.”

CBG is also a problem for growers. The longer a cannabis plant develops, the greater the chance that the CBGA and CBG contained in the variety will be converted into other cannabinoids. Growers thus have the choice: either grow marijuana for the explicit purpose of producing CBG, which means that the crop can be harvested early before completion of this conversion, or let the crop ripen fully so that part of the crop can be used for other purposes, but the rest has a lower CBG content for extraction.

In addition to larger amounts of plant material compared to THC or CBD extraction, CBG extraction also requires the use of specialized production facilities. Due to the low CBG content in marijuana strains, the chromatography device used to isolate and purify CBG extracts must be as accurate as possible in order not to use much more raw marijuana or hemp product than is definitely necessary. The cost of this high-performance chromatography equipment can mean high upfront costs for processors that do not already use this equipment in their usual processing processes.

“The cannabinoid specific markets are going to wildly fluctuate for another few years until the demand evens out,” added Rowland. “I do think it will remain considerably more expensive than CBD for a long time, but if CBD prices drop, you’ll see CBG prices drop too.”

With a significant overlap between the purported therapeutic benefits of CBD and CBG, it’s best to speak with a knowledgeable expert to help review recommendations that best suit your individual needs and situation. If you want to get the most out of your cannabinoids and / or take multiple cannabinoids simultaneously to experience the entourage result, look for a full spectrum CBD oil. This type of CBD oil consists of all cannabinoids and terpenes extracted from the cannabis plant, including THC, CBD, CBG and many others.

The downside of full spectrum products is that the ratio and portions of each cannabinoid may differ depending on the variety of marijuana from which the oil was made. Thus, it is more difficult to control what kind of reaction you will have; you may find that you react differently due to these variations depending on the batch, type or brand name of the CBD oil. It is equally important to remember that full spectrum CBD oils contain traces of THC, and although it is insufficient to get you high, it might be enough to appear in a drug test.